Time to leave Berlin, our peaceful apartment (thanks again to C, M, H & G), Friedrichshain Volkspark and the shops that were our ‘kietz’ for three weeks. 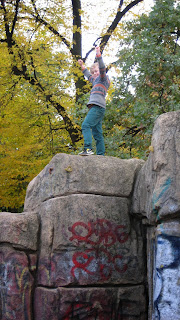 Unter de Welten (The World Underground) tour of Berlin’s bunkers, bomb shelters and DDR escape tunnels. Our tour was of the Gesund U Bahn station and the bomb shelters that were created for WW2. Our guide told stories of awful psychological traumas suffered by those using the bunkers and the Nazi regimes building program that was a complete farce.The “bomb shelters” would never have protected the tens of thousands of users as to  bomb proof the shallow subways was too expensive. These suffocating abysmal spaces were for mollify the community about the provision of
public safety.

I feel confident that we have escaped Berlin and possibly Germany without having eaten ‘Currywurst’. While we pledged to eat a Bretzel day (which lasted a solid two weeks) we are yet to succumb to this popular local dish. The picture doesn’t show that the ‘curry’ is a sprinkle of curry powder over a warmed ketchup. Not appealing to even our wurstmeister Hugo.