The Jomon period is thought to have begun about 13,000 years ago. Its people relied mainly on hunting, fishing, and gathering for sustenance, while exercising their ingenuity in daily life by creating a variety of tools full of vigor and mysterious charm. Under the theme of “Jomon Beauty,” this exhibition presents outstanding works of art created in diverse regions of the Japanese archipelago from the beginning to the end of the Jomon period, shedding light on the techniques with which these works were created and the spirit imbued in them. 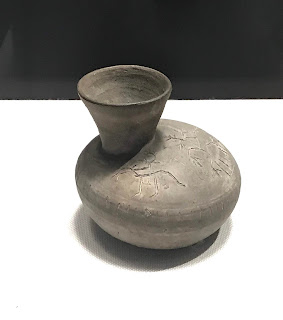 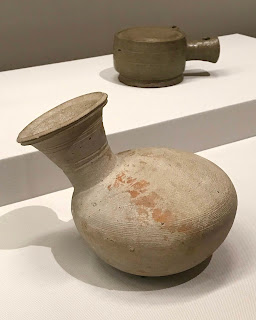 Fertile periods of artistic endeavor are not hard to come by in Japanese history. Many would cite, for example, the Edo (1603-1868), Muromachi (1392-1573), or Heian (794-1185) periods. Few, however, would mention the ancient Jomon Period (10,000-200 B.C. )in the same breath.
Jomon artifacts have been discovered across the country, from as far north as Hokkaido down to Kyushu. The Jomon Period — which is actually divided into a series of smaller periods — lasted from roughly 10,000 to 200 B.C., although this exhibition also includes items from the Yayoi Period (200 B.C.-A.D. 250) that followed it.
Aside from sheer length, another distinctive feature of the period was its environmental and social stability. Coming out of a long ice age, the people of Jomon were blessed with a warm climate, and plenty of fish, game and wild fruit and vegetables. This meant they could continue with their hunter-gatherer way of life with no need to develop or adopt agriculture, or to go to war for resources.
They did, however, require food storage containers and utensils to eat with, and this exhibition begins with examples of the jars, bowls and other kinds of everyday objects they used. Many of these objects are decorated with the “cord marks” that give the period its name Jomon, meaning “rope patterned.” This technique of creating texture by pressing cords or ropes into wet clay before firing was particularly prevalent in early Jomon pottery, but continued throughout the period. Sometimes, a keen aesthetic sensibility is evident where the maker highlights a contrast between roughly textured sections and other undecorated areas that have been polished smooth. 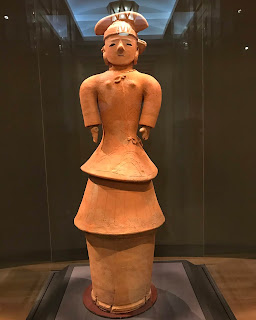 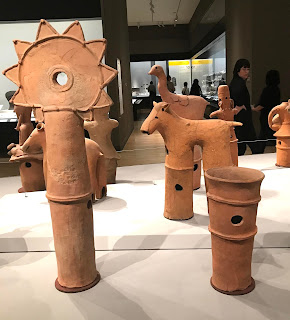 The exhibition’s largest section is left to near last and looks at the religious or spiritual dimension of Jomon culture. Here, figures of animals can be seen, perhaps used to pray for a good hunt, or perhaps made out of a sense of awe at the animals’ strength. Other objects are described as connected to fertility, or represent women giving birth, and some show people in unusual poses that we don’t recognize today. With an understated sound design playing as a backdrop, this is perhaps the show’s most atmospheric room. 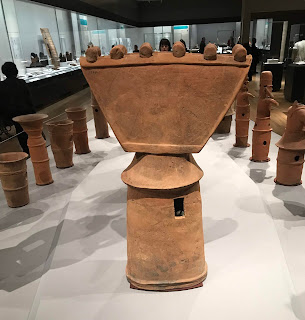 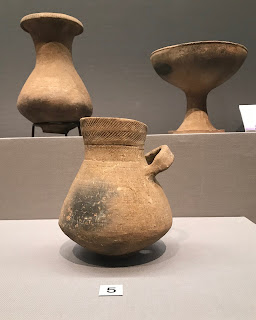 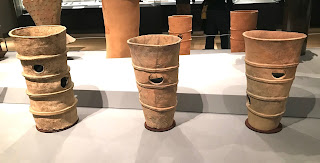