A matter of scale #2 Many

Many of the museums we have visited have used the scale of many to emote responses from visitors.

The Museum of the Natural World's Wet Collection was opened in 2010 after three years of construction. This is a functional, scientific research collection of 276,000 animals stored in ethanol filled vials. Yet,  it looks splendidly like an incredibly well funded contemporary art installation, I imagine this could have been a collaboration between Janet Lawrence, Louise Bourgeois and Marcel Duchamp. Was this wondrous cabinet of curiosity intended to be such a macabre experience? 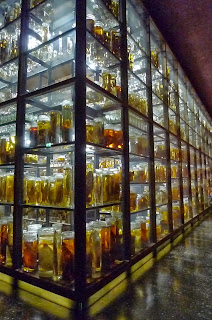 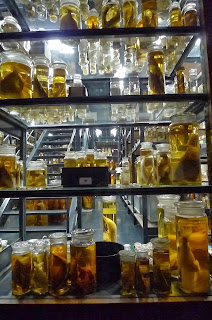 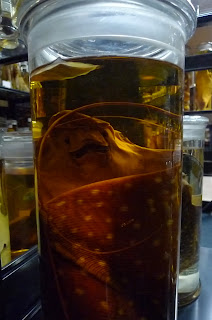 Many cultural institutions have communicated the sheer scale of murders during the Nazi Holocaust through the symbolic use of crowding, countless objects and a sense of multitude. 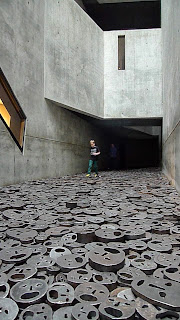 In the Daniel Libeskind designed Jewish Museum, Berlin, Israeli artist Manashe Kadishman's Shalekhet (Fallen Leaves) has littered the floor with 10,000 cut iron plates. One walks across the un-named, number-less & voice-less faces and a brittle "scream" echoes through the Memory Void.


Outside the Museum, a myriad of large-scale pillars are set off their vertical aspect creating a sense of disorientation and isolation. 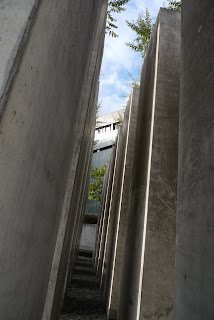 Similarly, a field of obstructing pillars has been used for the Memorial to the Murdered Jews of Europe. On both occasions we loss the boys, momentarily catching a glimpse of them as they began the inevitable game of 'chasey' through the maze.