Murray River Punch  is one of Ely's most well known performances and a significant example of the Australia environmental art. The image following shows Ely's performance in Adelaide, near the mouth of the Murray in 1980.

On a recent school holiday road trip, we stumbled upon the Palimpsest opening at Mungo Lakes & an exhibition of Ely's most recent work.
Interior Decoration (Installation, 2013-2015) was part of this year's Palimpsest which explores the inter-generational effects of untreated post-traumatic stress disorder. Ely untilises family furniture (she grew up on a soldier settlement in Robinvale) and her father's WW2 military service experiences. The context of the house museum Rio Vista expands the domestic narratives of the objects that Ely has created. 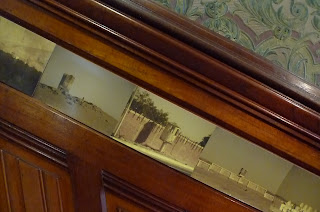